At my work, we tend to do a lot through CLI commands as we have the ability to run them through the CLI on our remote management agent. In case you ever wanted to know what the CLI commands were for changing power profiles, here they are.

This command will list the profiles on the system, placing an * next the currently active profile.

Here is a list of the profiles with the GUID code.

Here is the command to change the active profile. This one is using the GUID for the High Performance profile (monitor to sleep, but not system). 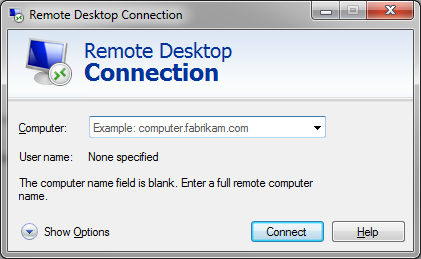 With the recent Covid-19 outbreak, we had to setup a lot of users to work from home. We were creating to options for remote access:

Using the option 1 was beneficial if the users had home computers we weren’t monitoring/managing as it only provide screen control with no real network connection. However, the two limitations to use Splashtop were:

The other thing is that in the bare minimum state, the agent/splashtop setup had a cost per workstation to it. While we were passing this along to our customer at our annual cost, some of them still didn’t want to pay it for multiple employees.

As a disclaimer: for security reasons, we never open RDP access to a machine through the network firewall to the public internet. We only use RDP access when paired with a VPN connection to limit exposure and security risk.

Instead of having to remote all the way into a users workstation and click through multiple screens, I finally figured out the various CLI commands to speed up this process.

I’ll first list of that I turned this into a batch file you can download and run on the workstation and then I’ll break down each command.

First off, download the zip and extract the batch script.

When you extract the batch file, there is only one place you are going to need to edit. You just need to change the highlighted part below to the users windows username, save it and run in.

All I would have to do was edit the script, upload it to their computer real quick, run it from the agent CLI and then delete the script. Sort of made me feel like a hacker 🙂

Breaking Down the Script

Now I’ll break down the script.

The first line of the script enabled Remote Desktop Connect.

The next line unchecks the Network Level Authentication checkbox.

The next command adds the necessary rules to the Windows Firewall to allow RDP connections.

Next one adds the user to the Remote Desktop Users security group on the workstation to authorize them to remote in using RDP.

For some reason, Chrome has decided to start having issues with thinking the built in Windows Defender Anti-Virus is out of date and when you try to download files, they fail the virus scan and you can’t use them. This could be PDF, Word doc files, etc. All Legit.

There one main fix for this, but I will list 3 ways to accomplish this.

Click the download link below. You will then need to extract the zip file and run the registry file. This will will make the registry change for you.

The next option is to copy a CLI script into command prompt. I mainly did this one because the remote access agent we use at work allows us to run an elevated command prompt from the agent window without taking remote control of the system.

You need to open Regedit from the Start Menu. Then navigate to:

Once there, change the value of ScanWithAntiVirus from 3 to 1.

Lastly, close and re-open Chrome. You will now be able to download and open your file.